SportyWap
Home ENTERTAINMENT Marry Chioma within 21 days if you want God to expose all...

Actor, Uche Maduawgu, has asked Davido to marry his former lover and mother of his son, Ifeanyi, Chioma Rowland, if he wants God to expose all the wickedness around him.

Recall that in previous reports on Tuesday, Nigerian singer and DMW boss, Davido reacted to a video that went viral on social media in which a clergyman prophesied that the singer would be poisoned by someone close to him.

Reacting to the prophecy,  Davido wrote;

”GOD WILL EXPOSE AND DEAL WITH ANY WICKEDNESS AROUND ME NEAR OR FAR….I’M BLESSED”

However, Nollywood actor, Uche Maduagwu who has always reacted to issues bothering on issues that have to do with Chioma and Davido has given the DMW boss 21 days to marry his baby mama.

Also Read:  Blaqbonez cries out as Davido did not promote his album

Uche Maduawgu in a statement via social media stressed that if Davido wants God to expose all the wickedness around him then he must marry Chioma.

”DEAR DAVIDO, STOP BEING STUBBORN LIKE #BUHARI, MARRY CHIOMA WITHIN 21 DAYS IF YOU WANT GOD TO EXPOSE ALL THE WICKEDNESS AROUND YOU THIS NEW PROPHECY JUST CAME IN NOW BECAUSE OF ALL THE PRAYERS NIGERIANS OFFERED ON YOUR BEHALF. THERE IS NO WICKEDNESS GREATER THAN PROMISING A WOMAN #MARRIAGE ONLY TO MAKE AM LORD OF ENGAGEMENT RING, GIVE AM BELLE AND AFTER SHE BORN, YOU STILL NO MARRY AM, OGA YOUR 30BG WICKEDNESS DEY CHOKE” 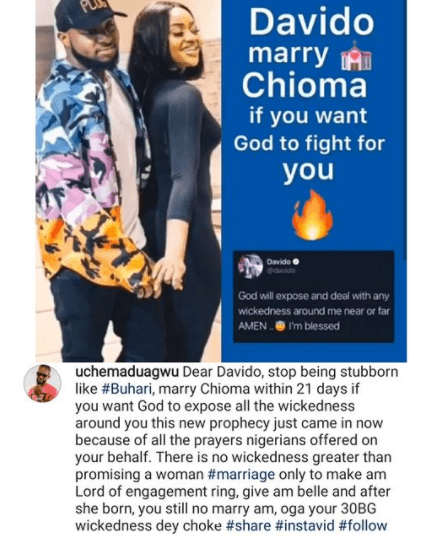 Also Read:  "My dad worked in a fast-food restaurant" Says by Davido(OBO)