Mike Ezuruonye is supper excited for the gift of sight after he spent 8 hours undergoing surgery to fix his eyes.

Mike revealed he had a growth encroaching the pupil of both eyes due to harsh movie production lights. A doctor advised that he should undergo surgery to prevent permanent damage and he took the advice.

He went on to point out that people who spend a long time looking at their phones and laptop screens are at risk of such danger and he advised such people to go for check-up.

Forgive being Reluctant but just had to share..Many don’t know what we go through in the course of our work (FILM MAKING)..

Had a growth encroaching the pupil of both eyes cos of over exposure to HARSH movie Production LIGHTS over the Years…(Heard looking into your PHONE/COMPUTER for too long also puts one in Danger)..Advised to get Surgery done,I was Scared…

After Surgery, for over 8 hrs ,i was without sight as my eyes were Demanded Tightly Closed,Tightly Shut by the Ophthalmologist Team of Doctors..Hmnnn..

Also Read:  'Your wife deserves to enjoy the Christmas too' - Noble Igwe

These Made me Appreciate more the GIFT of Sight GOD gave me…Goshhhh that I can never ever take for Granted..Scary experience…But GOD is always Faithful..Glad Surgery was SUCCESSFUL and i will be back real soon to my work and Passion…

Thanks to my FANS and TRUE SUPPORTERS..(NOTE Pls :Dont adhere to any IMPOSTOR who would want to take advantage to defraud anyone of his or her money…Pls I am Fine and Healing) I love you all always. 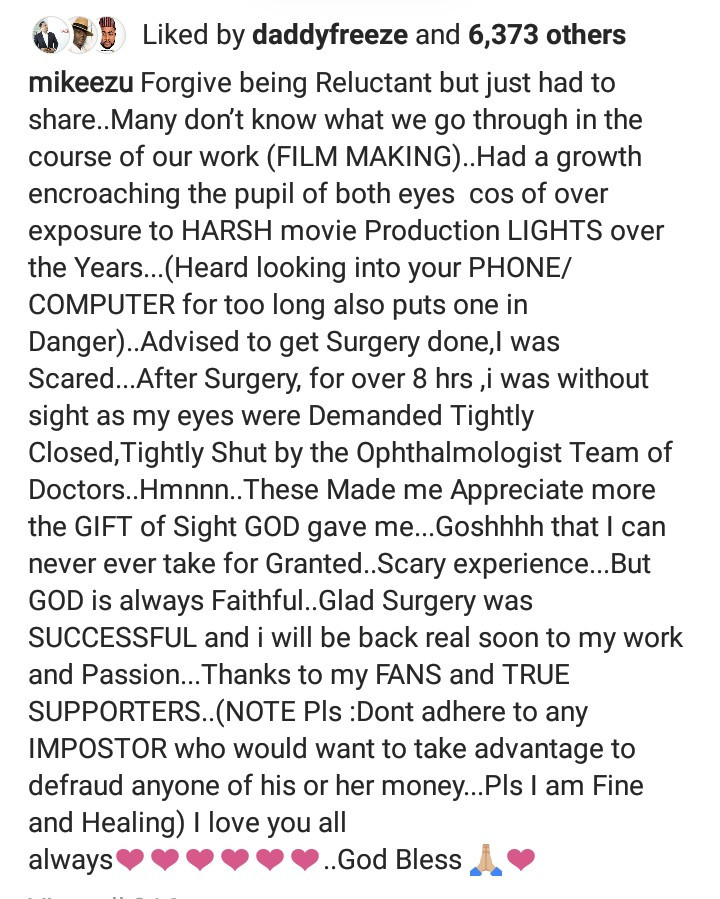